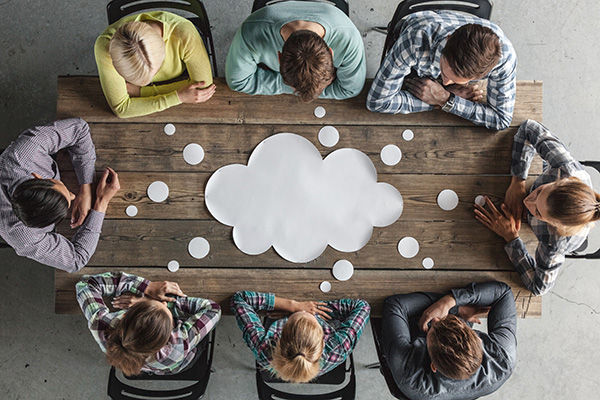 Your most important business asset—your staff—is often your most complicated one, too. Whenever you put a large group of people together, there are bound to be differences, arguments, small slights that turn into big grudges.

How can we keep these inevitable interpersonal issues from derailing our work? According to Laura MacLeod, a licensed social worker and the creator of the From the Inside Out Project, it all comes back to communication. MacLeod combines her social work expertise and 20 years of experience in the hospitality industry to teach employees at all kinds of companies how to resolve conflicts and speak and listen with empathy. Here are five of her tips for improving workplace communication.

#1. Remember that all healthy communicating groups have conflict
Your goal is not to avoid conflict altogether. Some kind of conflict is unavoidable, and not necessarily a bad thing—it means people are actually discussing what's bothering them.

“If your group, your staff, your meeting is all smiles, and everyone is happy and agreeing with each other, then you are not doing your job right. People disagree, and if they're keeping it quiet, that's not healthy.”

Your goal, instead, is to develop structures for dealing with conflict effectively and proactively. That all starts with creating an environment where people know they can air their grievances.

#2. Create an atmosphere where people feel safe and comfortable speaking up so problems don't fester
Without this step, none of the other steps will work. If your employees think they might be punished in some way for talking about their concerns, by you or the employee they are struggling with, they will ignore the issues until they get much worse. But a lot of people are unable or unwilling to confront conflict head–on.

“Nobody wants to be the person to say, ‘Hey, what's going on here?' so the problem gets ignored,” MacLeod says. “Maybe you pick up their slack and some resentment grows. The work still gets done, perhaps, but the resentment builds.”

“If you sweep something under the rug,” MacLeod adds, “it's only under the rug. It's still going to pop back out later.”

Tell your staff plainly that they should feel comfortable talking to each other about their concerns. Encourage them to talk things over in one–on–one conversations, not around other coworkers, and definitely not around customers or clients.

The best way for you to create this kind of culture is to model this behavior yourself whenever you encounter conflict.

“Doing this helps create a safe atmosphere where people can be direct with each other about what they're observing, what's bothering them,” MacLeod says. “It helps people feel safe and comfortable enough to hear others' points of view without feeling like they're being attacked.”

#3. Be honest!
Your employees might not even realize they're ignoring problems—or causing them. In order to identify issues and be able to move past them, they need to be honest with each other.

“I worked with a group of employees where someone was very negative on a regular basis,” MacLeod says. “You know those people: nothing is ever good enough, nothing is ever right, and they really bring you down. Oftentimes, these people have no clue what they're doing. They don't know they're being negative and poorly affecting people because nobody wants to tell them.”

If someone doesn't confront the person causing problems, MacLeod says, they may never realize the issues they're creating. Ultimately, being honest not only helps other employees feel better, and feel like the problem is being addressed, but it helps that person become a better employee, too.

#4. Start with a check–in
Some teams have a difficult time adapting to more open communication. Break the silence by starting meetings with a check–in. MacLeod says this can also be a way for coworkers to see how everyone is feeling before a shift begins.

“You say your name and the sentence ‘I feel _,' and then fill in the blank. And you can't use good or bad, because that's too general. So you might say, ‘My name is Laura, and I am really exhausted today. I was up all night with my baby.' Okay, so now that we know Laura is a little tired today, we know she might not be totally on target. So let's try to help her out here. The people who step up to help then know they can ask for help next time they need it. It's a way to create a culture where people are supporting each other.”

And remember: don't steamroll the conversation with suggestions for how to fix people's day–to–day issues. Often, people just want to be heard. Be authentic when you ask how people are doing and listen more than you talk.

#5. Don't jump in to solve your employees' interpersonal problems for them…unless it starts affecting their work
Lines of communication can scramble very easily, whether it's because people work opposite shifts and rarely speak face to face, or because of conflict that started off the clock but merged into the workplace.

No matter the cause, you shouldn't jump in to resolve the issue. At least, not right away. Keep an eye on whatever is happening, but give the employees a chance to handle it themselves.

However, if the issue is affecting the employees' work, then you can and should step in. MacLeod suggests talking to the involved employees individually. Let them know you've noticed what's going on because it's keeping them from getting their work done. Not only does this signal to the employees that they need to step it up, but you've also modeled a direct approach to dealing with the problem.