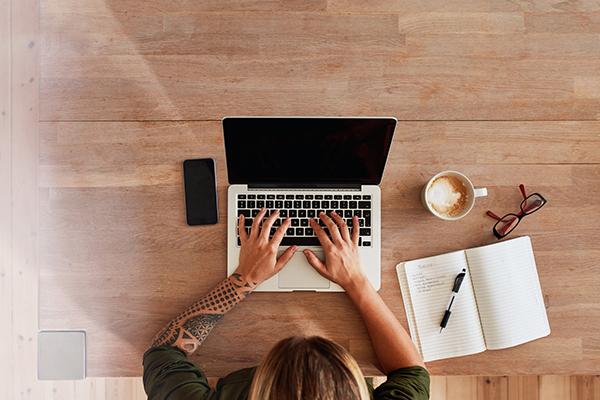 For many of us, home and work hold nearly equal importance. We want to be great parents, attentive friends, and stellar employees simultaneously, so we're constantly on the move, trying not to let one facet of our lives suffer for another.

When business owner and writer James Sudakow found himself in this position, worn out from his efforts, he knew something had to change. His newest book,  Out of the Blur: A Delirious Dad’s Search for the Holy Grail of Work-Life Balance, details what he discovered about himself and the elusive work–life balance while he reestablished control over his calendar and his life.

Sudakow and I spoke about his book recently, and about how other people who deeply value both their jobs and their families can avoid burning out while still giving each aspect of their lives as much attention as it requires. By asking yourself these four questions, and answering honestly, you can rediscover your priorities and set a path for a calmer and more fulfilled daily life.

1. Do I work to live, or do I live to work?
Your answer to this question will likely change over time, so it's helpful to check in with yourself periodically to see where your priorities currently lie. “I answered that question as work to live,” Sudakow told me, “but it's a continuous process, and it's ever–evolving.” The important thing here is to understand which aspect of your life is the star, and which is the supporting cast. That doesn't mean you should become bad at your job to benefit your family. Understanding your top priority merely allows you to make conscious tradeoffs so all your time is spent thoughtfully and effectively.

When we're constantly chasing time instead, we may be physically present somewhere, but our minds are already ahead of us, onto our next tasks, Sudakow said. “And why do that? Because then you're not enjoying work or life. You're always thinking about the next thing instead of enjoying the moment and what you're doing. I want to enjoy my work, and I definitely want to enjoy my family. But if I'm trying to bounce back and forth and trying to do too many things at once, it's really hard to be in the moment, because

I'm always thinking, ‘I have all this other stuff I still have to do.'”
Sudakow added that finding a work–life balance that worked for him “came down to prioritization. It's about making choices and accepting the implications of those choices.”

Documenting a full day gives you a place to start and shows you any discrepancies between your previous answer—how you want to spend your time—and how you're actually spending it currently.

“I was asking myself things like, ‘What was happening and when was I stressed out? What was I missing during that time? When was I feeling in control, and when wasn't I?'” Once you have a full day in front of you, Sudakow said, you can deconstruct behaviors you maybe weren't even aware of previously and highlight times when you felt overwhelmed. “Then ask yourself, ‘Why was that period of the day stressful, and what can I do differently?'”

Sudakow found his solution in his calendar. He decided he wanted his time at home to be removed from work completely, but in order to fully separate work from home, he had to first integrate them in his calendar.

“I was great at calendaring my work stuff because that's what I've been doing for a long time,” he said. “The home stuff I didn't calendar the same way, and that's what created all sorts of problems with integration and interaction between the two.”

“The way for me to avoid a ‘work–life blend'”—which requires multitasking to focus on home and work duties simultaneously, something Sudakow said he did not want—“was to create an integrated calendar where I literally see big blocks of days that are allocated 100 percent to work, or 100 percent to not work, or 50 percent to each. To bring this together into one big calendar actually helps me separate that time.”

He started by blocking out family time. “I almost did it in reverse, and this was kind of a risk,” he said. “But it's so easy to block your work time first and then try to squeeze in the family time, and then there's never enough.”

In the book, Sudakow writes about his father's influence on him and his goals for his work–life balance. His dad held an important executive role in a large company, but despite his busy work schedule, he was always available to and present for his children. Sudakow thinks our ever–connectedness makes that harder today. “It's so easy to be reached at any point in time. I think about my dad's era, where there were natural boundaries between work and life because the technology just wasn't there to disrupt it. Technology is awesome, but while their challenge may have been in needing easier ways to connect, our challenge is not being able to disconnect. We have to force these boundaries that used to exist naturally.”

3. What is actually urgent?
In order to create those boundaries, you have to determine what is urgent to you. A lot of this comes down to filtering out other peoples' emergencies, Sudakow said, and stopping yourself from manufacturing urgency.

“Everything seems urgent at work all the time. But a lot of it is artificial. I had to take a hard look at my responsibilities. I asked myself, ‘Will my business get degraded if this task isn't as urgent as I've decided to make it?' And quite often, the answer was ‘No.' When I get an “urgent” text or email, I have the same question. ‘If I don't respond to this immediately, with the same level of urgency I've been given, what are the consequences?' I never used to ask myself that question. I defaulted to urgency because many of us do. That's the pace business goes at these days.”

He started to realize how much of a problem these false emergencies were becoming for him when he apologized to a client for taking a while to respond, though only a couple hours had passed since the client had emailed him. “His response to me was, ‘I get a good sense for how you're wired right now, just by the fact that you had to apologize for two hours going by,' and that was a red flag for me. Why am I thinking that's such a long time? I had reduced the timeframe to a point that didn't make any sense. He would have been fine if I had responded at the end of the day. It wasn't that big of a deal, especially given what his email was about.”

Another problem with false urgency is how it ends up cascading to our tasks at home, Sudakow said. “It just becomes a habit. I would urgently do things at home that had no business being urgent.”

He found that many of the tasks he was completing immediately weren't as critical as he had made them, and eliminating them from his daily concerns reduced the pressure he was putting on himself. “I was manufacturing my own stress,” he said. To combat this, he created what he calls “urgency filters” to allow himself a moment to process whether something is artificially or legitimately urgent. For example, he checks emails and texts at set points of the day instead of relying on distracting notifications, and he turns off his phone entirely at dinnertime and leaves it off the rest of the night.

4. Where can I set limits?
To make this compartmentalization work—to ensure he doesn't feel guilty for switching off when it's time to do so—Sudakow sets limits for himself on what he can achieve in a day.

“Before, I had a really long list of things to do every day, and I was determined to finish them all. But I've implemented a rule: every day my list has three mission–critical things for work and three mission–critical things for home. This reduced my list by a lot, and over time—though this took months!—when my list got too long, I started shutting down tasks, instead of trying to cram them all in like I would before.” But be patient with yourself, he said, if this doesn't come naturally right away. When we're so used to working at high–speed constantly, “it takes a while for the behavior change to kick in.”